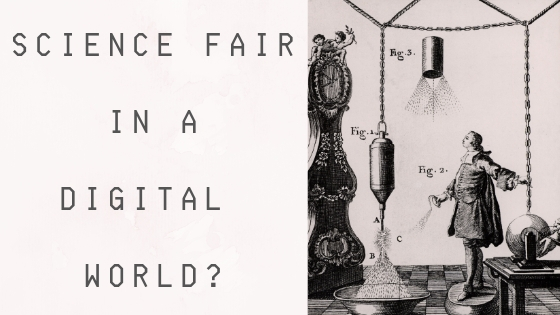 During the last few weeks I have been an observer in the process of a school science fair. When I first heard about this endeavor, I started thinking about, is there a place in this digital world for an old school science fair? Let’s start with what I observed of this process.

Students did preliminary research regarding their science concept, followed by performing the experiment. Then, they reported the experience with poster board displays.The science fair included hypotheses involving animal behavior, the chemistry of fruit preservation, and electrical voltages. But the science fair was not only about science exploration. Over the course of several weeks, the students had to manage their time, in some cases actually redesigning their experiments, make sure they were only testing one variable, and then they created a visual display of their work. Teachers gave support and even class time to guide the students, and the Fifth grade in this school monitored the process with check-ins andposters of encouragement. The result was a room filled with excited students demonstrating all they had learned to their classmates, younger schoolmates, teachers and their parents!

So let’s look at the science fair process through the 4 C’s of 21st Century Skills.

Critical Thinking – the students had to solve a problem of their own design.

Creativity – the students had to design an experiment from a problem they were interested in.

Collaboration – (this one is tricky) while no teams were formed for this science fair that does not mean it could not be a component. I did observe students discussing their projects and getting great feedback from each other.

Communication – the science fair was an opportunity for students to express their understanding in a visual format as well as orally during the actual science fair.

So, to answer my own question, yes, a science fair does belong in a digital world. The hands-on experience and the 3 C’s attest to that. Now would I “tech up” the experience? Maybe in an intentional way not just to add technology. Some students are better with oral communication than visual displays. Maybe a differentiated choice could be that they film their experiment and then narrate it with a video program. Just one thought.

Does your school do science fairs? Do you incorporate a digital component? What about allowing for collaboration? Share with your ideas via Twitter (@edtechease) or Facebook (https://www.facebook.com/edtechease/) or email me, swladis@edtechease.com.